This is the first in a series of blog posts about our Alaskan cruse.  We traveled with Celebrity Cruises on the Celebrity Infinity, round trip from Seattle.  The cruise took us to to port stops in Ketchikan, Juneau, and Victoria BC.   We also had 3 days of cruising, in the Pacific Ocean, up to Hubbard Glacier, and through the Canadian inside passage (east of Vancouver Island).

We departed on May 22nd, from Seattle.  This is the first Seattle round trip cruise of the year for the Infinity.  Since we followed the repositioning cruise, we actually were not scheduled to depart Seattle until 11:59pm.  Our cruise documents said not to arrive at the port until 7pm.  Because of bus schedules and us being ready way ahead of time, we arrived at the pier around 7pm.  The ship actually wasn’t there yet! (Not that I was surprised).   So we dropped off our luggage and filled out our health forms and got the boarding information.  Since the ship wasn’t going to board until 8:30 or 9:00 and we had a high boarding number (#29), we decided to get dinner elsewhere.  (All of the pictures from day 1 are available at http://picasaweb.google.com/mike.helmick/AlaskaCruise2009SeatteDays12.) 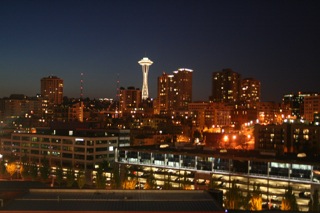 Seattle Skyline from the Infinity

Just a short way down the waterfront, we headed to Red Robin.  I tried one of their chicken burgers for the first time, and it was pretty good!  As we were walking, we saw the ship pulling in, and that was a cool sight to see and one that you normally don’t get before departing on a cruise.   After dinner, we made our way back to pier 66.  The security line went pretty quick, but then we went into a holding area.   We eventually made it on to the ship around 9:30pm (I think…).   Since we had already eaten, we were free to explore a little.   This ship is beautiful, but I’ll get to that in a later post when I give you my ship tour.   Here is deck 10 (the pool deck) shortly after we boarded.

We made the around on Friday night, trying to figure out where everything is and get a preview of what we’d be doing for the next week.  One important thing we did was to tour the spa.   The Infinity (and many other Celebrity ships) have a spa feature called the persian gardens.  The gardens are a “thermal suite” that contains 5 elements.  There are heated benches, heated benches in a heated room, a turkish bath, and herbal steam room, and two fun showers.   They sell 50 passes for the week @ $99 a piece.  We had pre-planned to purchase, and did so the first night.  This turned out to be a great place to relax a little bit every day.  I highly recommend getting there early to get a pass. 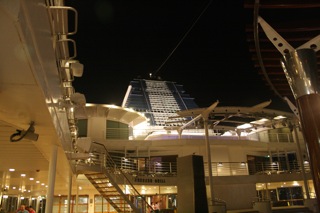 Deck 10 of the Infinity

After the spa we did a little more touring.   A lot of stuff was already closed for the evening (the pools, etc).  They did have a seating for dinner in the main restaurant and I believe the buffet was open as well.  Since we had dinner, we kind of skipped all of that stuff.  Of course, we would end up eating plenty of food during the next week.

Probably around 10:30 or so, we headed back to the room.  Two of our three checked bags had arrived.  We unpacked Cortny’s suitcase and our shared garment bag, but my suitcase still hadn’t arrived.   I peeked out in the hall a few times, and eventually started walking up and down the hall.  I found my suitcase, it had been brought up to the floor, but not distributed to the room.  I decided to grab it, because I wanted to unpack!  A few minutes later, we were entirely unpacked.   That is such a good feeling to not have to live out of a suitcase on vacation, and it is a feeling that we are not used to.

We missed the 11:59pm departure, but finally pulled away from the dock around 12:20am (on the 23rd).   It was very smooth, and we didn’t notice that we were even moving until the ship had moved about 20 feet from the shore.  It was a very peaceful departure and sailing out into Puget sound.  Once we were underway…. well then we ordered room service!  Nothing huge, just some hot tea and a plate of cheese and fruit.  It was a nice little departure snack.  We had wanted to stay up for a while anyway, watching Seattle slip away into the darkness.   After leaving Elliot bay, we went passed Ballard (where we live) and Shilshole Bay (where we sail from) and then further up the coast.

When we woke up in the morning, we were just starting to clear the end of Vancouver Island, leaving the Strait of Juan de Fuca and entering the Pacific Ocean.   More on that next time.   Here is a little preview of what is to come. 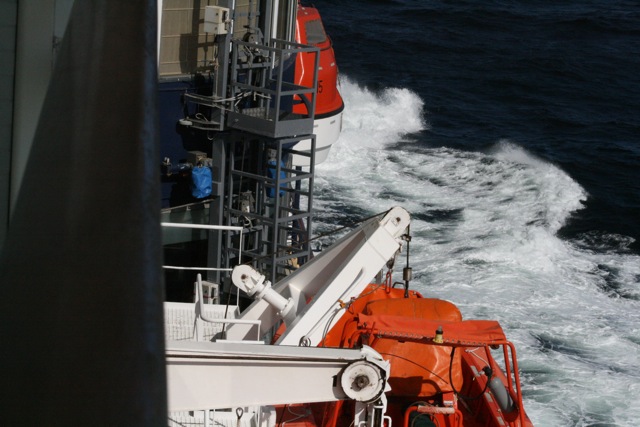 The blue water of the Pacific, rushing past our veranda.