So all non-US-flagged ships have to stop in Canada when transporting passengers from the US to the US.   Therefore, we made a port call in Victoria, B.C., Canada.    This was actually the third time we have visited Victoria (in the last year for that matter).  We went once with my parents and once when I attended a conference there.    Originally, we were planning on staying on the ship and enjoying it while other people were ashore.   Well, it turns out that this was totally unnecessary.   The ship NEVER felt crowded, Celebrity does a really good job on this front.   And it was a beautiful day in Victoria, so we had to walk around a bit.  (All pictures from Day 7)

We started the day with a galley tour (we were very lucky to get this tour, it is not often given).   I’ll have pictures of this in my next post.   After lunch we both had massages (that we scheduled the first night).   I had the 4 hands massage (2 massage therapists).   Since they are working at the same time, for the same length as a regular massage, you get double the massage!  Totally awesome.  Since it was a port day, our massage treatments were discounted.   It makes a lot of sense to save your spa treatments for the port days.

The ship arrived in Victoria at 3pm.   Rather late for a port stop, but it worked well.   The cruise dock in Victoria isn’t quit in the main harbor, but we walked downtown in about 25-30 minutes (at a very brisk pace).

While we were walking, I remembered that last time we were in Victoria there was a soda shop that was under construction.  So, we went there!  We shared an ice cream sundae and had italian soda type things (a fizzee is what they called it, I think). 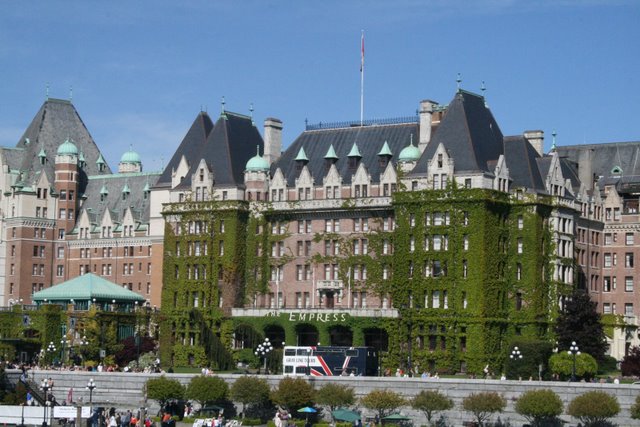 After that, we walked up and down Government street a bit.  Popped into a few shops.   There was some interesting native art that we hadn’t seen before, but it was very expensive, so we left it there.

The ship didn’t require that we be back on board until 8:45 pm, but we decided to head back a little early.

This allowed us to grab some sushi, relax on the top deck in the sun, and still catch our 8:30 dinner.    Somewhere in there we packed, because we had set our luggage out before dinner.

After dinner, there was the last night variety show.  It was pretty fun, and we got to see the ventriloquist, whose show we missed the first time.

So that is pretty much it.   We arrived in Seattle the next morning around 6am.  We had a late departure time, so we went to breakfast around 7:45/8:00am-ish.   Then we lounged around on the pool deck in the spa area and did some reading.

We were scheduled to depart around 10:20, but they made an announcement around 9:15 that said final departure call.  So we headed out, showed our passports, picked up our luggage, and headed for the bus.   A short bus ride on the #15 and we were back at home.  We unpacked, and then went to pick up the puppies!  They were very happy to see us.

That is the cruise!  We had an awesome time, cruising is a great way to travel, and it was nice for us to take a relaxing vacation instead of a active, constantly moving vacation.

I’ll be back with one more blog post about the cruise, giving you a tour of the Celebrity Infinity.